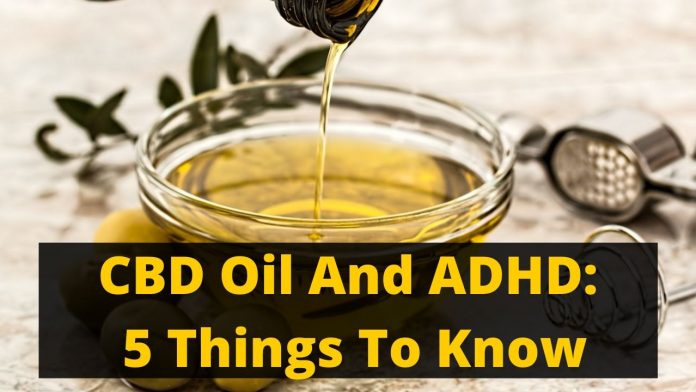 CBD oil’s rise in popularity has people eager to learn if their medical ailments could be cured or treated by this all-natural miracle compound. While a lack of empirical scientific study prevents the clear recommendation of CBD oil for any medical condition, a growing pool of anecdotal supportive claims has drawn a lot of attention. This means that everyday people are trying it and finding it effective for helping with a range of medical conditions.

CBD oil provides all of the benefits of the cannabis plant without exposing you to THC so you won’t get high from using it. The CBD oil is extracted from the hemp strain of the cannabis plant but should not be confused with hemp oil. According to CBDKYRO.COM, hemp oil does not contain cannabinoids which are essential to achieve the health benefits of CBD oil. Cannabinoids impact receptors in the brain that support emotions, pain, movement, appetite, and mood.

The American Psychiatric Association states that attention-deficit/hyperactivity disorder (ADHD) is among the most common mental disorders affecting both children and adults. People with ADHD have trouble focusing, experience hyperactivity (excess movement) and lack of impulse control. More common among boys than girls, the disorder affects close to 10% of all children in the US. While there have been very few medical studies about CBD oil and ADHD, many parents are using it to help reduce common frustrating ADHD symptoms with varying levels of success. If you’re thinking about using CBD oil for you or your child’s ADHD disorder, here are 5 important things you should know.

1. CBD Oil Is Being Used To Treat ADHD Symptoms But Is Not A Cure

There are only two traditional ADHD treatments, stimulant drugs, and behavior modification. The medications can be highly effective but also cause a lot of unwanted side effects and no parent enjoys medicating their child. Limited studies showed less than promising results for CBD oil as a possible treatment for ADHD but it can be helpful in reducing its symptoms. For example, a lack of dopamine in the brain and leads to low focus, and CBD oil stimulates the brain to produce more dopamine.

According to Healthcare Weekly, the most common ADHD symptom being treated with some success using CBD oil is restlessness. Case studies showed a visible reduction in hyperactivity and impulsivity after using CBD oil.

2. There Have Been Limited Studies On How CBD Oil Affects ADHD Patients

Until recently the classification of CBD oil, laws about how it’s harvested, and it’s questionable legal status in the US, had prevented real medical studies from taking place. The new legislature has opened the door to scientists though and we can expect more studies very soon. When there are limited studies available, you have to take caution.

One small-scale study showed that CBD oil had a limited effect on cognitive function and a small but noteworthy improvement for impulsivity and hyperactivity control. Other studies showed that CBD oil effects became less effective as the patient sample got older, meaning young adults didn’t show as much improvement. Far more research is needed to determine just how effective CBD oil is for treating ADHD or its symptoms.

3. All-Natural Supplements Should Still Be Discussed With Your Doctor

Traditional western medicine doctor are still on the fence about the use of CBD oil, as they should be, doctors deal in cold hard facts and we don’t have enough of them yet. Even so, before you take any supplement, even an all-natural one, you should discuss it with our doctor first. This is especially true if you are taking any prescription medications. Even if your doctor is not supportive of your use of any holistic products, they need to know in order to look for possible complications.

4. The Delivery Methods Makes A Difference

According to DailyCBDMag.com, there are some variables to how long it takes CBD to start working. Vaping is the fastest methods and the effects are felt in minutes while ingesting it via an edible can take hours for any effects to be felt. The amount of time to takes to work and the amount of time it works for each person might be different according to their age, size, weight and delivery method. Since ADHD is most prevalent among children, vaping isn’t usually an option. Many parents will use CBD oil as a tincture or edible. CBD oil is also available in a capsule form with many people will find familiar. As it is not approved by the FDA, there is no recommended dosage which is another reason you would want to seek the advice of your physician. People will often keep a journal of their progress in order to help them find the correct dosage by tracking symptoms.

5. CBD Oil Might Be Beneficial For Reducing Side Effects Of ADHD Medications

While effective, stimulant ADHD medications can have a number of harmful side-effects, especially for children. Even if CBD oil doesn’t turn out to have a direct therapeutic benefit for treating ADHD, it will clearly help manage these unwanted side-effects. The side-effects caused by ADHD medications that could be helped by CBD oil are as follows:

Kids with ADHD can have trouble gaining weight due to an increased metabolism but also because their medication limits their appetite. Kids on medication will often skip lunch and just pick at their dinner. CBD oil can help increase your appetite.

● Trouble Sleeping
CBD oil has been used for a more restful night’s sleep by people of all ages for a long time. It can help you fall asleep faster and get a better quality of sleep.

Both the ADHD condition itself and the medication used to treat it can cause an increase in anxiety. CBD oil has been shown to increase dopamine, decrease cortisol and help you feel more relaxed. It’s been used to treat anxiety and depression in all ages and could be a benefit of using CBD oil for ADHD.

10 Successful Tips for Weight Loss and Living a Healthy Lifestyle

50+ Adorable Side Belly Tattoos for Girls

5 Reasons To Train As A Nurse Educator