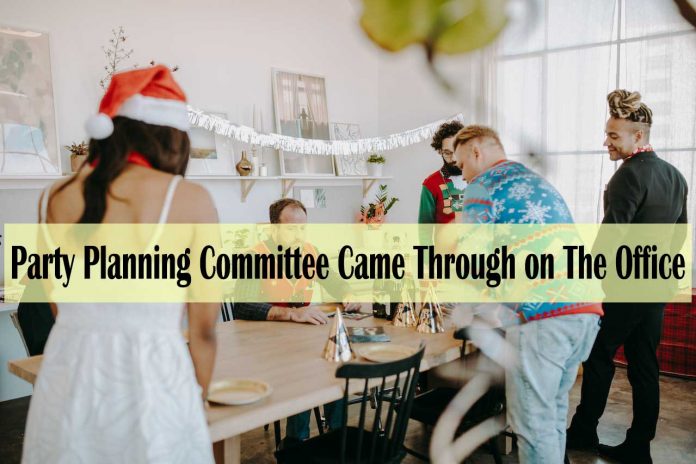 The office has also given us some of the most popular TV show characters like Michael Scott, who plays the role of the branch manager. It has also triggered the rise in the use of iconic catchphrases like “that’s what she said”.

While there are many other elements to this show, one of them includes the famous and exclusive party planning committee. Whether it’s a company Christmas party or celebrating someone’s birthday, the Party Planning Committee always gave it their all.

Some of the best parties and events have been huge hits because of the efforts they put in. Let’s take a look at the top 3 times the party planning committee truly came through.

The Office has always taken their corporate Christmas party one level above the rest. A lot of drama unfurls in this episode as Angela becomes way too dominating and demands that things be done a specific way.

Karen, who is new to the office, offers her suggestions about celebrating Christmas at the office. She gets support from the other members but Angela immediately cancels all her ideas. Karen is then asked to leave but she receives support from Pam.

After this, the office is split into 2 parties, one hosted by Karen and Pam and the other hosted by Angela. However, Karen and Pam’s party offers lots of great food, great music and karaoke. Compared to that, Angela’s party is plain and boring. In the end, however, they decide to merge both parties and have a good time together.

If you have watched The Office, then you would agree that Toby’s farewell was one of the best events planned by the Party Planning Committee. From Michael singing “Goodbye Toby” to fireworks and a Ferris wheel, they truly went all out.

This mainly happens because Toby is leaving the office to move to Costa Rica and Michael is elated to finally get rid of him. He’s so happy that he gives the party planning committee some extra money to make this the best party that they have ever had.

Angela refuses to meet his eccentric demands and that is why the responsibility of organising this party falls on Phyllis’ shoulders. Phyllis puts in a lot of effort and makes it the best office party with a bounce house, amazing food and Darryl’s band playing some great music. This one was truly one of the best parties and the best episodes on the show.

A classic episode from the show, launch party features Dunder Mifflin preparing to launch their new website and hosting a party for it. Michael invites his girlfriend Jan to the party but as she was recently fired she refuses to come.

Michael then takes Jim with him who realises on their way there that Michael has received an invite to a chat room instead of a party venue. They rush back to the office and Michael asks the party planning committee to arrange a launch party immediately. He asks them to go aloud to show Ryan that he can host a better party.

Although under a lot of pressure the party planning committee arranges a great party. Michael ruins it, however, by ordering pizza from “Pizza by Alfredo”, which is a pizza place everybody dislikes. On top of that, when they refuse to accept his discount coupon, he holds the delivery boy hostage. The office finally convinces him to let the boy go after a few hours.

Kudos to The Party Planning Team!

While we all love watching The Office, it is not easy having a boss like Michael who has high expectations from all of his employees. He could have you looking for a specific “christmas card for her” or a giant anti-gravity machine, it can get difficult to meet his demands.
Considering that a lot of the office parties were either fairly last minute or unnecessarily grand, you have to appreciate how the Party Planning Committee has always come through for the team. They did their part in making the show one of the best, most popular television series of all time.