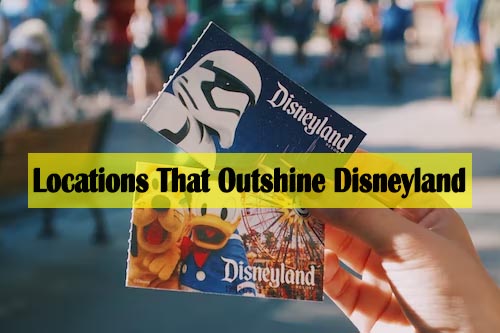 Amusement and theme parks are the places to go when you are seeking an experience of excitement and buzz. They offer the best escape from reality, allowing you to discover magical characters and enjoy the thrills of exciting rides. These parks have something for everyone, from parents and kids to solo travelers and those who like traveling with friends and families.

For a long time, Disneyland has been synonymous with amusement and theme parks. It was opened in 1955 and was the first theme park by The Walt Disney Company. It is a popular amusement park for kids and parents because it evokes nostalgia and brings families together.

Today, there are numerous theme and amusement parks around the world. But it is important to install a VPN on your phone and kids’ phones when visiting places like Disney world to avoid data leaks using public WiFi.

But what place is better than Disney World? This article will discuss the top six locations that outshine Disneyland.

Blackpool Pleasure Beach is a popular tourist attraction and among the most visited amusement parks in the U.K. It is situated in Lancashire County, North West England. This amusement park has been a family business since A.W.G. Bean and John Outhwaite established it in 1896.

The park hosts numerous records, including the largest wooden roller coasters collection in the U.K. They are the Blue Flyer, Nickelodeon Streak, Big Dipper, and Grand National. Currently, this amusement park has ten roller coasters. The Big One was the world’s tallest and steepest roller coaster when it was launched in 1994. Icon holds the latest record as U.K.’s first multi-launch roller coaster.

But roller coasters are not the only attractions at the park. There are 38 attractions at Blackpool Pleasure Beach, including three thrill rides, five water rides, and seven family rides. Other attractions include:

● Adventure Golf: A 12-hole course opened in 2008.
● Ripley’s Believe It Or Not!: An oddities museum constructed across two floors.
● Pasaje Del Terror: An interactive horror maze opened in 1998.
● The Arena: A large ice rink and home to Hot Ice.

Blackpool Pleasure Beach brims with colorful flowers, plants, wild gardens, and perfectly trimmed bushes. A plant identifier app will help the kids know the plants’ names. For instance, you can install a flower identifier to help identify what kind a plant is. This amusement park for kids provides a perfect opportunity to learn about plants.

Zootopia is another famous attraction, exhibiting over 200 species and 2,000 animals. It covers a significant area of Everland Theme Park, spanning over 160,000 square feet. You see the animals at ease on a bus that turns into a boat to cross the river. Feeding the animals up close also adds to the experience.

Ferrari world offers one-of-a-kind driving experiences in a Ferraro and with a trained instructor. The Zip Line experience lets you fly above the world’s highest roller coaster. The Abu Dhabi Roof Walk lets you walk on the iconic red roof and see the world’s largest Ferrari logo up close.

This is Japan’s biggest theme park with Hollywood, New York, and San Francisco zones, giving it a strong American feel. But it’s not all about the U.S.; it has an area particularly dedicated to Hello Kitty, a Japanese cartoon character. Universal Studios has six theme parks, and this was the first to be opened outside the U.S.

The park covers 130 acres, with attractions across nine zones. The tenth zone, The Wizarding World of Harry Potter, opened in July 2014. It is modeled on the same area names as Universal Studios Hollywood and Universal Orlando. Attractions unique to Universal Studios Japan include the Hogwarts Express Photo Op and the Black Lake. Super Nintendo World, which focuses on Super Mario, was opened in March 2021 as the eleventh zone.

This theme park has the most roller coasters and some of the best on earth. Full Throttle, one of the 20 coasters, features the tallest vertical loop at 49 meters. If you want a full-throttle coaster experience, you will enjoy riding on the world’s fastest-looping coaster. Scream! is not a vertigo sufferer’s ride because of its floorless carriages.

The park has 11 uniquely themed areas, each featuring its own attractions, rides, and food service venues. Because of its proximity to Los Angeles, the epicenter of the television industry and American film, Six Flags Magic Mountain has been featured in several productions. Popular films include the 1977 Rollercoaster, the 1983 National Lampoon’s Vacation, and the American sitcom Step by Step.

Europa-Park is Europe’s second most popular and Germany’s largest theme park. The entire resort occupies about 235 acres and hosts six hotels, one movie theater, and one campground. It has over 100 attractions, including 13 roller coasters, 12 water rides, and 15 European and three fantasy-themed areas.

Alpenexpress Enzian, which speeds through a diamond mine, is the oldest roller coaster, opened in 1984. Besides numerous attractions, Europa-Park has gained more significance as a media center. Nickelodeon, Prosieben, Sat 1, BR, and SWR produce shows in the park. These shows make Europa-Park a popular kids theme park.

Europa-Park has a unique collection of plants, with over 535,000 flowers. Identifying these plants can be tricky, but an app for plant identification will be helpful. Download a plant identifier app for iPhone before visiting the park.

Disneyland is an industry leader when it comes to amusement and theme parks. However, there are numerous alternatives that you can visit and enjoy. Some of these locations offer attractions and rides that outshine Disneyland. Remember to use VPN when using the public WiFi in these parks and install a plant app to identify the colorful flowers you will see.

The Complete Guide to Buying a Trailer: Everything You Need to Know